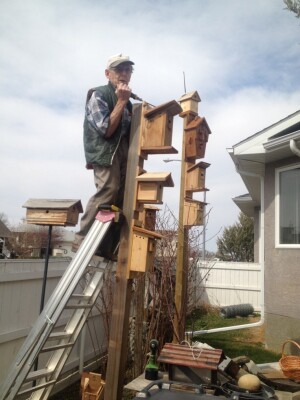 Hubertus Paul was born to Maria and Paul Schoenbrunn on March 29, 1930.  His formative years would require growing up in war ravaged Europe.  Even so, the immediate family including older brother Gerhard, managed to survive, and rebuild afterwards.  Schooling as ‘Kaufmann’ ultimately earned Hubert a position with Kreissparkasse in Northeim, which led to meeting Wanda, followed by their first child.  However, with a large extended family in Canada and the country holding so much promise, they immigrated in 1960.  Frische luft combined with hard labour in agriculture and construction ensued.  Though demure in stature, Hubert grew stronger through a considerable appetite; literally and figuratively.

A keen storyteller, Hubert sought to captivate and instruct.  Similarly, a prolific writer, he corresponded with family, friends and heads of state.  Dressing up for special events aided the effect.  His spirited singing usually carried the tune to Happy Birthday and O’ Tannenbaum, at times adding the harmonica, piano or accordion.  For Oktoberfest, he could bust a move on the dance floor, polka-ing with the ‘rest’ of them.  Recently, he was heard singing ‘Lilli Marlene’, which depicts love saddened by war.

Hubert’s love for nature began early; trekking in the woods and studying to become a Game Warden, which his mother deemed too dangerous.  He cared for all animals, nursing some that were seriously ill.  In later years, he built bird houses, which due to their great number were referred to as apartments.  Finches became a favorite, and at 89, he regularly climbed a ladder to tidy up their roosts.  Also known as the ‘mystery’ gardener; he was ready to plant or transplant, with ever-present work boots, shovel and miracle gro in the trunk of his car.

Employed in large scale construction for over 25 years, Hubert’s cement working prowess can be seen in many institutional projects throughout Alberta.  Noteworthy are several Hospitals, Canada Research Centre, U of L- diving platform, and the Oldman River Dam (his name is on a commemorative plaque at the lookout site).  The driveway he formed and poured in 1981 remains level and crack free.

Highly intelligent with an incredible memory, Hubert read everything and anything.  He consumed loads of data; highlighting, cataloguing, and then sharing….. Expert on numerous subjects, his insights were uncanny, and hard to dispute. His repertoire included crafting specialty tools, branded with the ‘H$’ moniker - for patenting potential.

An outdoors enthusiast, swimmer and ‘fusballer’ (Uwe Seeler was a favourite); Hubert observed a healthy lifestyle.  Constantly referring to a medical ‘lexicon’ brought from the old country for whatever might ail one, he also researched natural foods, vitamins, and remedies; making copious notes of important information for others.  An all-purpose ingredient mixer for good things to eat and drink, he was renowned for organic bundt cakes and herbal teas.

Hubert was a devoted husband and caregiver to Wanda, his wife of 53 years.  Sons Andy and Chris were taught the importance of duty and diligence - after reading all of the instructions and perhaps passing time at a Fair.  Opa helped Oma to look after and tutor their 3 grandchildren; Dylan, Lynn and Kristin.  He is also survived by 5 great grandchildren, daughter-in-law April, as well as many nieces, nephews and in-laws across Canada, the US and Germany.

Hubert’s life accounts and learned counsel will surely stand out in the minds of those he met; be it at work, family gatherings, churches, clubs and events, or in his favourite retail stores with ‘wholesale’ pricing.  He will forever remain in our hearts – please sing a song or plant a tree.